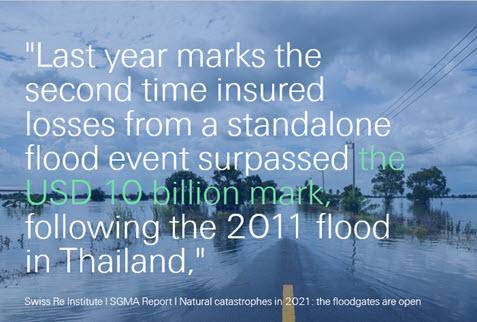 Swiss Re Institute | Natural Catastrophes in 2021: The Floodgates are Open

Flood was a common factor among the major global loss events of 2021, and a peril risk managers and the industry should pay close attention to going forward, according to the latest sigma report from the Swiss Re Institute.

The report is a call to action on flood. Long considered a secondary peril, it says flood deserves the same attention as primary perils when it comes to data, modeling, and rigorous risk management practices.

There is no reason not to expect reoccurrence given the increasing frequency and severity of flood events due to warming climates, exposure growth and the inadequacy of flood defense infrastructure in many countries.

While there are brief global highlights below, the full report has the complete 2021 takeaways and future recommendations.

The main loss event of 2021 was Hurricane Ida in the U.S., which battered the South in August with category 4 force winds as it moved northeast. There it unleashed intense rainfall resulting in heavy flooding in New York City and surrounding areas.

Overall insured losses from Ida are estimated by Swiss Re Institute at $30-$32 billion, highlighting the huge losses that can result from a single primary peril event. It also shows that inland flooding represents a large, and potentially growing, fixed element of tropical cyclone risk.

Flooding across central and western Europe was the main event in 2021. In fact, it generated economic losses of USD $40 billion and insured losses of USD $13 billion. The event was the costliest flood event of the year and the costliest natural disaster on record in Germany and Europe, ever, when normalizing (in this case adjusting for inflation only) past event losses to today.

While devastating, this event may be useful to risk managers in hindsight as it demonstrates the numerous interconnected factors that go into flood risk evaluation.

Last year brought record seasonal floods in China and India, and after Typhoon Rai in the Philippines.

Historically Asia has suffered the highest economic flood losses, but it lags in insured loss terms. The seasonal floods in China were the most severe in economic loss terms, rising to USD $23 billion. However, the associated insured losses were USD $2.3 billion, showing a large flood protection gap.

This gap may shrink over time with growing population and economic wealth in the region, the report indicates.

While the report makes clear that more can be done, risk assessors can use a wide set of currently available tools to help evaluate flood risk. Overall, commercial insurance risk managers have a variety of risk transfer tools, such as parametric insurance, as well as traditional and innovative options, to help manage primary and secondary perils.

You can also explore our flood preparedness guide, which can help you understand your flood risks and to develop plans for mitigating flood damage

Get the publication: Natural catastrophes in 2021: the floodgates are open – Swiss Re sigma